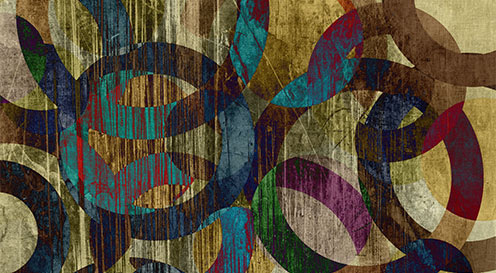 Art in which any depiction of real objects of nature is subordinated or entirely discarded in the process of production. The aesthetic contents is often expressed in a pattern of structure, pure colours and lines. Strictly speaking art in which some elements are recognisable be they blurred distorted or broken to heighten the experience is referred to as semi-abstract.

When representation of real objects is completely absent, the resulting art is nonrepresentational or nonobjective.

It is debatable when abstract art actually was introduced. Some would rightly argue it has been with us from before the neolithic stone age. Others say that it began with some water colours by Wassily Kandinsky in 1910. others again purport that Abstract art really was introduced by cubist painters Pablo Picasso and George Braque. The transition towards the defining moment could also have been introduced many places independent of each other. E.g. The Neoplasticism in the Netherlands and Suprematism of Russia.