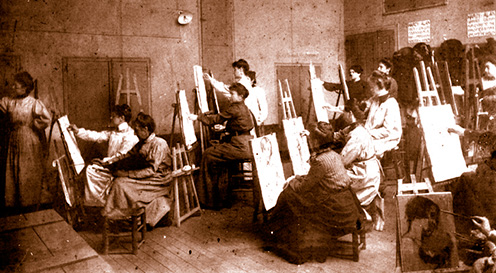 Founded by the Italian sculptor Filippo Colarossi, the Académie Colarossi was an art school in Paris. The art school was established in 1870 as an alternative to the official Ecole des Beaux Arts in much the same way as the Académie Julian came into being two years before in 1868.

The Colarossi School, along with Académie Julian, admitted female students to its courses and allowed them to draw from the nude male model. So these were the first mixed gender art schools. A number of female artists from all over the world attended with success. Think here Jeanne Hébuterne, Bessie MacNicol; Emily Carr; and Camille Claudel.

The school closed in the 1930s. It is rumoured that things descended into chaos and that the defining moment was when Madame Colarossi burned the school archives as retribution for her husband’s philandering.