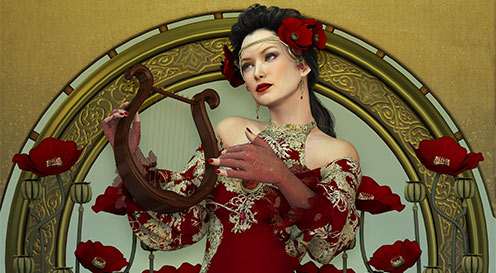 A style of art which influenced painting, sculpture, printmaking, architecture, furniture design and decorative design in the first decade on either side of 1900. The french word Art nouveau literally means ‘new art’

As an avant garde movement, its principle characteristics were a cursive, flowing lines, and whiplash curls. Plant and flower motives were abundant. In architecture the organic shapes were very much evident in Anonio Gaudi’s architecture. The posters of Henri de Toulouse-Lautrec are also held as being quintessentially art nouveau-ish. The arts and crafts movements at the time were interested in many aspects of other cultures from various ages and blended it all beautifully together in Art Nouveau. Thus it used elements from celtic art, rococo, oriental calligraphy and Japanese art in particular. In the USA, the trend emerged a little after France and the UK, but with no less impact. The expressive lines of art nouveau are visible today in Eero Saarinen’s TWA Terminal at Kennedy Airport, and in Frank Lloyd Wrights’s Guggenheim Museum.

After art Nouveau, there was a transitory period in which all the art and design turned more angular as a result of faster production methods. The result was Art Deco. Art historians prefer to demarcate the transition sharply but in reality the transition was smooth almost imperceptible and the two styles happily coexisted in parallel.

You can read more about Art Nouveau in this article, and additional content about art movements here.