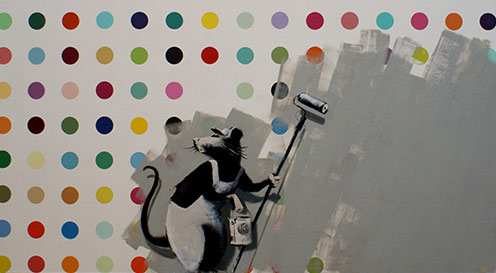 A word attributed to Artprice whose art market reporters began to use the word in 2007. They and others have since used the word in the context of the meteoric rise to fame enjoyed by the British street artist Banksy. In addition, Banksymania refers to the prices that the artist’s works command. In the last decade, the prices have sky-rocketed in both the primary- and secondary art market with accompanying bouts of media frenzy.

The true identity of the artist is assumed only to be known by his former gallerist Steve Lazarides, and a small handful of other clandestine ‘others’. On balance, the art world assumes that Banksy is a ‘he’ and singular though could be a group of women—however unlikely that may sound to many. Every now and again, the media speculate in a name. Everything from David something-or-other to Robin Banks has cropped up. No doubt it all adds to the fame and notoriety of Banksy.

The artist creates fast, striking, gritty stencil work in the streets. Most of his works are critical commentaries on society and the world order. The epicentre for his work Bristol, UK, but the artist appears to have ventured further and further out geographically and some of the works attributed to Banksy must have been created by imposters given that no one can be at two different places at the exact same time.

But it is not all paint on bricks and mortar. The artist has produced works on canvas and board which have been bought by private collectors and museums in good faith of it being the real deal. The untitled work above is a Banksy canvas acquired by Bristol Museum. The painting clearly depicts a rat, one of the artist’s favourite motifs. The rat is defacing one of Damien Hirst’s repetitive spot paintings such as Abalone Acetone Powder from 1991.