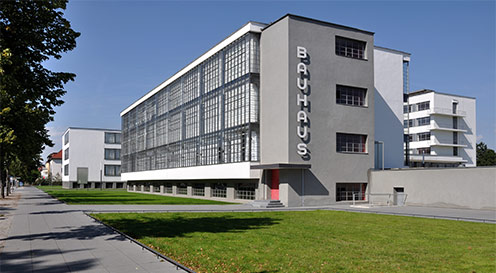 The German Staatliches Bauhaus commonly known as Bauhaus, roughly translates into ‘House of construction’ or ‘School of Building’ in English.

Bauhaus has gone down in history as one of the biggest influences on the evolution of modernism in Europe long after it ceased to exist.

It was an art school that combined crafts, fine arts, typography, graphic design and architecture as one holistic view for the first time. Amongst other things, Bauhaus is famous for the approach to design that it publicised and taught. Notably, it disregarded the past where it made little sense and aimed at looking at every problem in a fresh, experimental, and subjective way. Also, it took people through three hierarchical stages of being an artisan. I.e the students began as apprentices, became journeymen, and eventually masters. Today it is pretty much replicated in every art school.

Founded by Walter Gropius, the art school operated from 1919 to 1933 at three different locations. First Weimar under the aegis of Gropius between 1919-1925, then in Dessau from 1925-1932 under Hannes Meyer, and finally in Berlin between 1930-1933 under Mies van der Rohe. In 1933 the school was closed by the Nazis for ideological reasons.