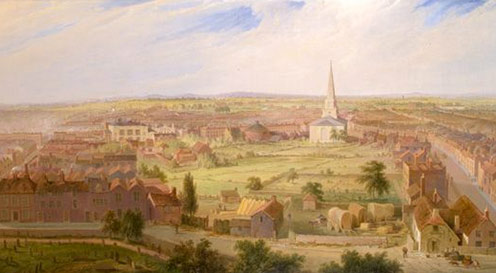 The Birmingham School of painting was a group of landscape artists working in Birmingham. The artists never formally organised themselves as a group, but art historians classify them as such under that umbrella term because of their shared approach to painting technique akin to early impressionism. Yet the precision of depicting trees was in a manner that has more in common with portraiture. A good few of the canvases began as oil sketches painted plein air later to be completed in artist studios.

About some of the artists

Of course, the painters were not confined to the West Midlands and painted throughout the UK and abroad. As an example, the titles of David Cox’ paintings are as diverse as:
In Windsor Park
Gipsies on Dulwich common
Lake Scene, North Wales
Sunset, Hastings
Butcher’s Row Hereford
Westminster from Lambeth.

Edward R Taylor is classified as an artist associated with the School. But he is also categorised under both Arts and Crafts and Romanticism. These paintings fit comfortably within the context of the Birmingham School of Painting:
Galton Bridge 1905
Lincoln Cathedral, Evening 1911
The Avon from Bidesford