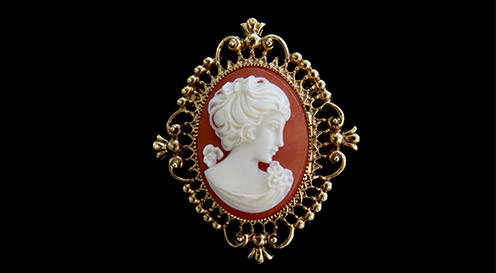 Usually referring to a painting or decoration executed in several shades of just one colour. I.e. a monochrome painting in colours other than greys. When painted in different shades of grey, it is also termed ‘grisaille‘ and when in yellow ‘cirage’ and dusty green underpainting as veneda.

Camaïeu, also called en camaïeu, is a technique that employs two or three tints of a single color, other than gray. It creates a tonal monochromatic image completely disregarding local or realistic colour. There are several good reasons for working art up in this style. Friezes, enamel work and wall decorations can appear as if bas-relief e.g. as cameos.

In decorative arts, the term is applied to monochromatic painting in enamels. The technique uses a buildup of white enamel to create highlights and light areas on snuffboxes, watches, rings, medallions, pendants brooches, and so forth. These are broadly referred to as Cameos. So are the same created in ceramics or earthenware e.g.as perfected by Wedgwood.

This French word Camaïeu was once synonymous with cameo, but its meaning became restricted in the early eighteenth century to be closer its origin. Camaïeu happens to be a registered trademark of the clothing manufacturer Camaïeu International as well.