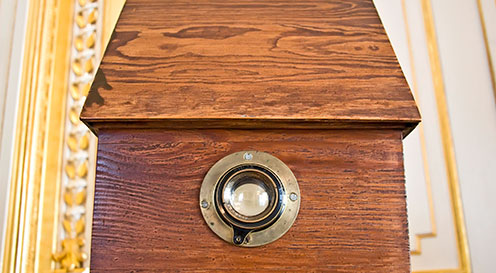 A camera obscura is an optical device which eventually led to the invention of both photography and the photographic camera.

The invention consists of a box with a hole in one side. Light from an external scene passes through the hole and strikes a surface inside. There it is reproduced and turned upside-down, but otherwise both colour and perspective are being preserved.

This image can then be projected onto paper or canvas, and then traced to produce a highly accurate representation. Artists may well have been the first to use camera obscure to save time in their work processes according to the Hockney-Falco hypothesis. There the box may have been an entire room next to another room where the actual scene is being staged, but nevertheless operating from the same principle with dark curtains separating the two rooms and using one large suspended lens.