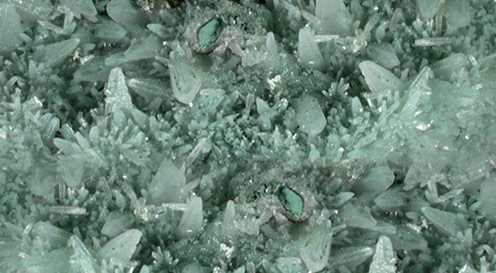 A pigment which was very popular among Italian Renaissance artists now known as Terre Verte and Verona Green. Celadonite is a mica group mineral with the formula K(Mg,Fe2+)(Fe3+,Al)[Si4O10](OH)2. Green earth pigments like Celadonite were also used extensively by medieval and renaissance artists for the underpainting of flesh tones.

Indian monks in Ajanta used its natural earths for green pigment. The Romans were also fond of the green pigment, which has been detected in Roman wall paintings. To be exact has been found in 76 samples of murals dating from 1st to 3rd century C.E. as sampled from 14 Roman sites in Switzerland and Pompeii. Celadonite was the most frequent pigment found among these samples. Attribution of this celadonite was to Cyprus.

In 1847, it was ‘rediscovered’ on Monte Baldo near Verona and subsequently written about and matched up with Renaissance art, and subsequently art from earlier periods in history. The name is derived from French and means sea-green.