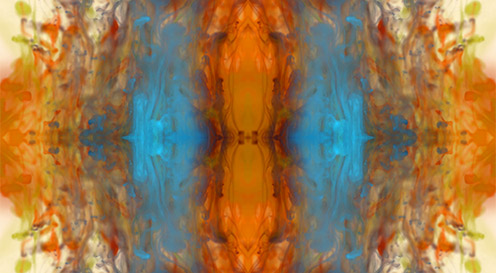 A technique for generating images favoured by some artists such as the Surrealist artist Oscar Domínguez or the Dada artist Max Ernst.

In decalcomania paint is being applied to a painting surface which is then being folded to create mirrored pattern. The technique is good for planned but also unplanned inspiration by simply mirroring along several axes and viewing the result unfold.

It thus has some similarities to blot drawings, a popular exercise for young school children, and also somewhat related to Rorschach test and notions of Automatism.

In addition to that, it also refers to appliying one painting surface to another, which then transfers the motif from the former to the latter. The word comes from the French décalcomanie, and was once the technique by of engravers and printers who transferred the artwork to pottery or other materials. Today the shortened version is “Decal“. Invented in England c. 1750 by the Frenchman Simon François Ravenet. He referred to his process as décalquer short for papier de calque (i.e. tracing paper).