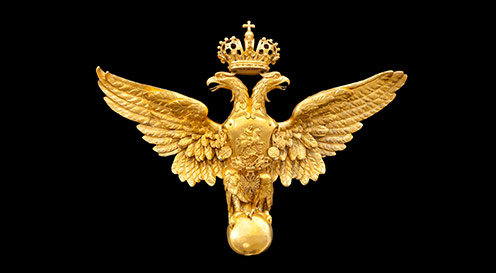 The double-headed eagle commonly occurs as a symbol in art, heraldry and vexillology. In the more recent history, it has been associated with Russian Tzars and known as the Russian Imperial Eagle, but the imagery has been used for millennia. Archaeologists have traced the symbol back to the Hittite civilisation of 20th century BC.

Since 1472, when Ivan III married the Byzantine princess Sophia Palaiologina, the double-headed eagle has predominantly been regarded a Russian symbol. After having been put out of use by the former Soviet Union, it was reintroduced by the Russian Federation in 1993. As heraldry and in art, the symbol has two heads which signify total authority over earthly matters and spiritual matters respectively.

Today the symbol is used on flags, coats of arms and emblems of sports clubs. The Albanian flag features a double-headed eagle, and both Serbia and Montenegro feature the ‘mutant’ eagle in their coat of arms. In addition, the Double-Headed Eagle of Lagash is used as an emblem by the Scottish Rite of Freemasonry.

Return to the art glossary
Return to entries beginning with D