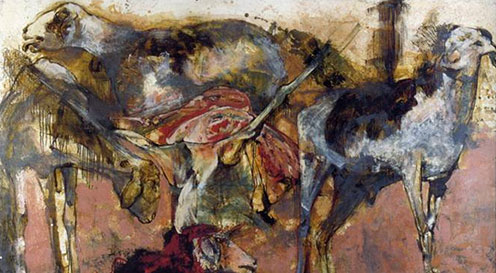 Ecole de Dakar is the name of an art school and a term loosely applied to a period in Senegalese art history from 1960 and 1980 in which creativity flourished.

Léopold Sédar Senghor, the then Senegalese president, and his government established better conditions for art by funding art schools, a national museum and a series of cultural festivals.

A big part of the arts programme consisted of touring exhibitions which established a distinctly African voice freed from past colonial influences. The result was a particular aesthetic which became known as Africanité and it was hugely instrumental in reconnecting Senegal with its identity.

Another part of the programme was the art school Ecole de Dakar where many of Senegal’s artists taught. The staff included Iba N’Diaye (1928-2008), and Papa Ibra Tall (1935-).

Return to the art glossary
Return to entries beginning with E