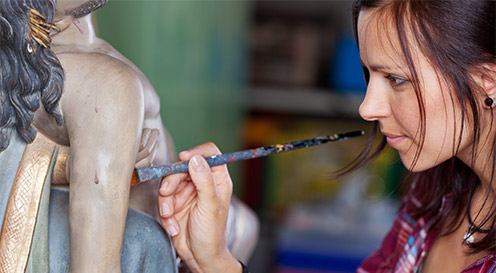 A Spanish term from the art of sculptures and means to bring to life (cf incarnation in English). It refers to a technique employed by the artist Juan Martínez Montañés in the 17th-century Spain.

It is the act of sculpting or carving sculptures followed by painting, varnishing and sanding repeatedly until a lifelike appearance is being achieved.

17th-century Spain witnessed a new, more intense, kind of realism in art. The Catholic Church wanted to revitalise itself and counteract Protestantism. A similar thing had taken place in Italy, which art historians now refer to as ‘counter-reformation’.

As a direct result of this, painters and sculptors sought to make images of Christ, the Virgin, and the saints as convincing as possible. This realism was starkly austere, emotionally gripping, and even gory, intended to shock the senses and stir the soul. Painters of this period such as Diego Velázquez and Francisco de Zurbarán are much celebrated today. However, the sculptors—Juan Martínez Montañés and Pedro de Mena were as celebrated at the time though their legacy is little known outside Spain today.

Encarnación sculptures were carved in wood and then ‘polychromed’ a popular term for simply painting something in many colors with great skill and precision.