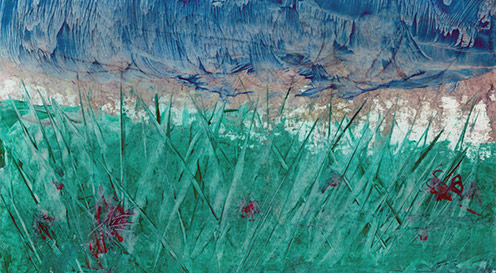 An old technique of using coloured wax for painting. The technique involves pigments blended with wax. When used with heat, such as an iron, the permanent color is burned into the underlying surface for good.

Indeed, the word encaustic originates from the Greek word enkaustikos, which does mean to burn in, though today that part of the process is not necessary for a painting to be called encaustic.

Painting with vax dates back to cave art where animal fat and beeswax was used together with coloured dirt to create art. Later the technique has waxed and waned in popularity. The Fayum mummy portraits from Egypt from between 100-300 AD were created with encaustic painting technique. In the 20th century, Wassily Kandinsky, Paul Klee, and the American artist Jasper Johns created encaustic paintings.

Whether something is encaustic or not is sometimes up to debate and might depend on the amount. Art restorers have discovered that Joseph Mallord William Turner used beeswax in some of his paintings, though, his mixed technique of tempera followed by oil paint does not quite class the end result as encaustic.

The technique can be difficult to master and depends on timing and intuition with the temperature and mix of paint. The attraction of the medium is achieved effects such as three-dimensionality and luminousity. Heat lamps and hot irons can be used to extend the period in which you can work with the method.