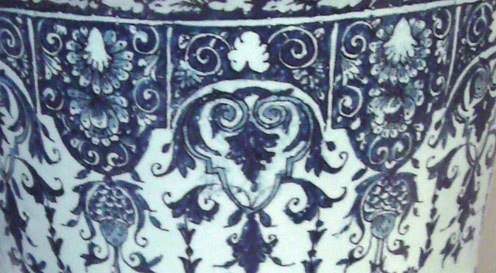 In art production and in collectible antiques, Faïence or Faience is fine earthenware (as opposed to porcelain). It can have a colourful, opaque, glaze such as Majolica (traditional tin-glazing technique). In the 17th and 18th century France, Faïence was extremely popular.

Faïance is a French term, which in turn refers to the Italian town of Faenza, famous for pottery since the 16th century. The invention is not Italian because the refined ceramic tradition dates back to the ninth century Iran, and the ceramic invention goes far back as ancient Egypt.

The Moors brought the Faïance making to Europe during the Arab expansion where it spread in occupied Al Andalus (Spain and Portugal) and in a non-occupied territory such as Italy. After 1492 Faïance was part of parcel of e.g. Spanish culture. With Spanish invasion of the Lower Countries (Netherlands and Belgium), faience was adopted amongst the Dutch and Belgian Flemish. In the Dutch city of Delft, the Delftware was being perfected to the extent that it became an export article. In colloquial Irish, people refer to their saucers and cups as their ‘delft’.