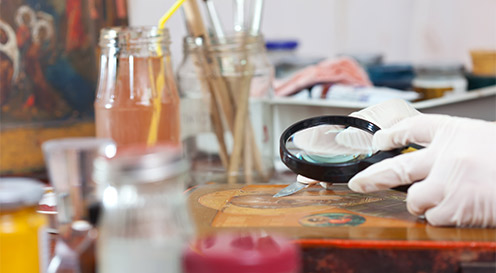 Any form of misrepresentation of the authenticity of a work. It can be a forgery, but falsification of a certain work may not have been the initial intention for a copied piece of work. It is not illegal to copy or imitate other art in many cases. However, work originally marked as copies of the originals may later be passed off as genuine by someone. The act of falsification then occurs at this particular point in time when the copies are being claimed to be original.

Tom Keating, the famous British Art forger, worked for an art restorer who asked him to imitate famous French impressionist painters as part of his training. Later Keating realised that his boss sold his work as genuine, and it led him on to a career as art falsifier.

Henricus Antonius “Han” van Meegeren served a short sentence for falsification. During the second World War, wealthy Dutchmen wanted to prevent displacement of Dutch art in the hands of Adolf Hitler and the Nazi Party. The plan partly worked in the sense that The Nazis obtained van Meegeren’s forgeries, thinking they were the work of the old Dutch masters. Famously, a falsified “Vermeer” ended up in the possession of Reichsmarschall Hermann Göring. After the war, the forgery was discovered in Göring’s possession and the paper trail went all the back to van Meegeren. He was subsequently arrested on 29 May 1945 as a collaborator, under the suspicion of having sold Dutch cultural property to the Nazis. At the time, the defendant could be sentenced to capital punishment for the offence. He was let off with a shorter sentence by proofing that he had forged the painting. His request was a bottle of whisky, paint supplies and materials; and officials observed him paint a Vermeer. Interestingly, van Meegeren could also shed light on the chemical composition of the fakes. For instance, he mentioned that he used the phenolformaldehyde resins Bakelite.