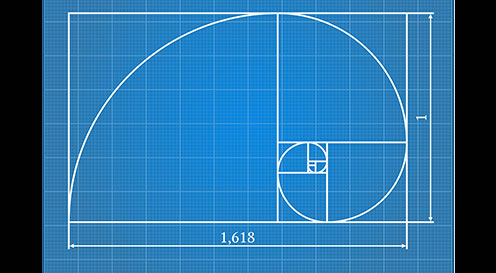 A canon of proportion applied in architecture, art and all things visual. The term refers to the ratio between two unequal parts of a whole when the proportioned of the smaller to the larger is that of the larger to the whole.

The golden section is accurately determined as 0.618 to 1 or 5 to 8 units, which in turn are based on old Greek Euclidian geometry. But the first formal reference to the golden section comes from Vitruvius who lived around the first century BC. it is also firmly connected with Fibonacci’s sequence 1,1,2,3,5,8,13 as defined by the formula f1=1, f2=1, fn+fn+1=fn+2.

The harmony in this is no coincidence since it can be observed in nature, the human body, for instance, is always remarkably true to the proportional ratios of the golden section. See for instance Leonardo da Vinci’s Vetruvius Man

It was during the Italian Renaissance that Europeans at large became fully aware of the golden mean, though they and most other cultures in the world had always used it subconsciously anyway. In 1509 Luciano Paccioli wrote the book ‘De Divina Proportione’ (Lit. the divine proportions) as illustrated by Leonardo da Vinci. As it was a revelation that it applied to birds and bees and everything, one would be excused for calling the ‘rediscovery’ a divine recipe or broken code for creating everything.

The golden section is particularly useful in determining proportions in a sculpture and in a painting and to create focal points where one or more invisible partitioning lines true to the golden section would intersect. Architectural standards have long adhered to the golden section extensively. It is hard to escape. Even the white goods fitted in a kitchen follow the golden section because they are constructed ergonomically to fit humans who in turn have the said proportions. For the brave, there is an associated field to study called Dynamic Symmetry, which uses the golden mean as a foundation.