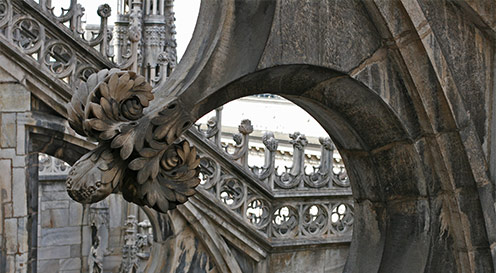 An aesthetic style predominant in the Middle Ages in Europe (approximately 1150 to 1500). Gothic art is mostly associated with the great Cathedrals, both in terms of architecture and interior design and art. Alter pieces made in the period often display crenellations mimicking church architecture. Paintings and sculpture have characteristically elongated figures and highly patterned.

The art from this era is highly stylised imbued with a certain beauty. It only attempts to take on three-dimensionality up to a certain point. Somewhat confusingly at first, there are several Gothics. There is the Roman Gothic, the Nordic Gothic, both of which fit into the European umbrella term of ‘International Gothic’. In addition, there is the so-called American Gothic, which obviously does not fit into the same historical context and culture as the former.