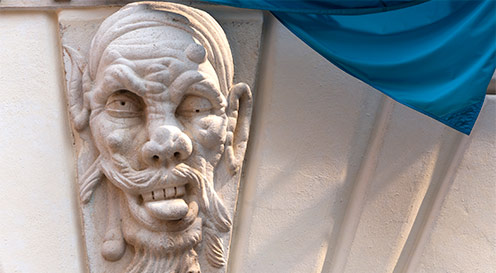 The word grotesque refers to several different things. First and foremost it is a style of art in which fantastic human and animal figures are combined with leaf and flower forms. In this style the forms can be interlaced in curvilinear arabesques.

Secondly, grotesque can simply also be used to refer to a work of art produced in the that particular style. See also grotesco and groteschi.

The word is derived from the Italian word grotte, i.e. grottoes, also the name given to excavated underground chambers of ancient Roman buildings. The style imitated the wall decorations of these architectural relics.

Raphael (Raffaello Sanzio da Urbino 1483 – 1520) is one of few artists credited with having ‘revived’ grotesque forms in art.