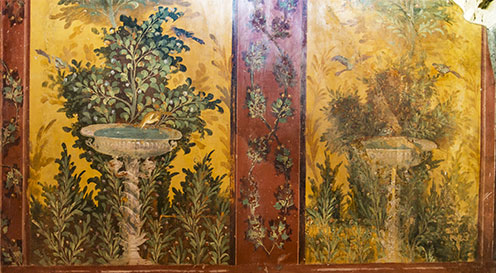 An Italian word for art produced in the grotesque style. One piece of art can then be referred to as grottesco whereas several works can be called grotteschi in plural.

From the Italian 1560s word grottesco, we have the French word grotesque.

It literally means “of a cave” and is mentioned by Georgio Vasari in the Lives of Artists. The original meaning was restricted to the flamboyant style of Ancient Roman decorative art rediscovered and then copied in Rome at the end of the 15th century.

The origin of the word is from the discovery of paintings found on the walls of basements of Roman ruins that were called at that time Le Grotte (The Grottoes) due to their appearance. These were from the corridors of the Domus Aurea, the unfinished palace complex started by Nero after the Great Fire of Rome in AD 64.

Since then, the term became interchangeably with arabesque and moresque for types of decorative patterns using curving foliage elements.