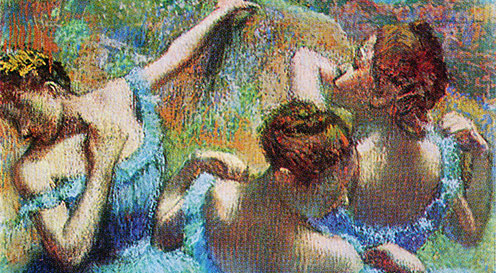 Considered the first great modern art movement, impressionism is a break away from tradional techniques of continuous brush strokes. It is also a break from the representation of sharply outlined objects and from preconceived notions of the colours and light in nature. From the stuffy studio work, impressionists went out and did plein air everyday scenes urban as well as rural and did so with an immediacy that was not seen before. Persons and objects in Interiors and exteriors made up compositions, which were cropped in a more dynamic way e.g. as inspired by Japanese woodcuts.

The impressionists sought to break light up into its component parts, and to play on the empheraral play on surfaces. They also worked in a succession of discontinuous strokes of colours side by side, which when combined by the eye created what is termed optical mixture.

Today we may regard impressionism as ‘nice’ and ‘innocent’, but at the time it was revolutionary, and the first impressionist exhibition in Paris 1874 was met by great hostility.

Return to the art glossary
Return to entries beginning with I