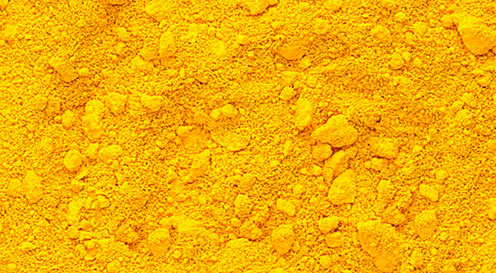 Sometimes it is best not to let facts get in the way of a good story. In the past, Indian Yellow pigment was purportedly produced by Indian cows. The story claims that cows were fed only mangos and mango leaves and left behind a yellow crystal when urinating. The scarcity and price of the pigment were further justified with a tale of the Indian practice having been banned due to cows suffering from severe malnutrition.

Either way no one has actually witnessed the practice, except that the author Eastaugh refers to Mr. T.N. Mukharji of Calcutta whose account of the pigment production he has taken on face value in his compendium on pigments and dyes.

Whatever the truth is, the chemical composition of Indian yellow can easily be replicated in a laboratory. From its Chinese and Indian origins, however, it is speculated that the pigment was extracted from bark of a tree or ground down gall stones.

Indian yellow, also called euxanthin is semi-transparent somewhat luminescent yellow pigment much favoured by Venetian painters. The pigment has been used throughout Europe in oil painting and watercolours and today it is made chemically under the name magnesium euxanthate.

Return to the art glossary
Return to entries beginning with I