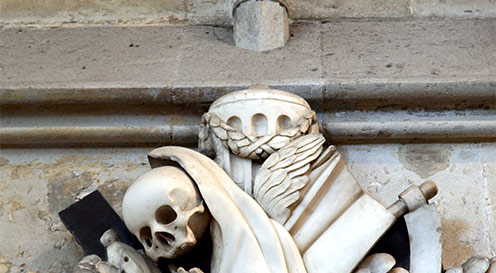 In Latin this literally means ‘remember you must die’. Memento Mori has appeared as in art since the earliest civilisations. The reminder of death could be a skull for instance.

An example of this is Dürer’s St Jerome in the study from 1514. But it is not just a part or a detail within a painting. An entire artwork can be a memento mori. Arguably much of YBA artist Damien Hirst’s production deals with mortality.

In popular usage the term is almost interchangeable with Vanitas, which more or less deals with the same popular notion that we carbon-based life.

Click here for more on the topic of death in art.

Return to the art glossary
Return to entries beginning with M