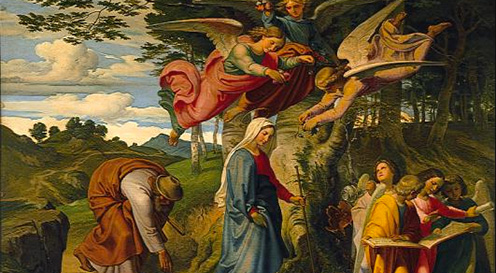 A group of Austro-German Romaticist painters in Rome adopted the name Nazarene, i.e. people from the birthplace of Christ Nazareth. The label was used by critics in the early 19th century to mock the artists for their somewhat orthodox biblical manners, clothing, and hairstyles.

The Nazarenes reacted against Neoclassicism and in particularly against the associated routine art education of the academy system. Not unlike the Pre-Raphaelite brotherhood, the Nazarenes hoped to return to spiritual values in their art and sought inspiration in medieval- early Renaissance art. By doeing so, they rejected what they considered the superficial virtuosity of later art.

Return to the art glossary
Return to entries beginning with N