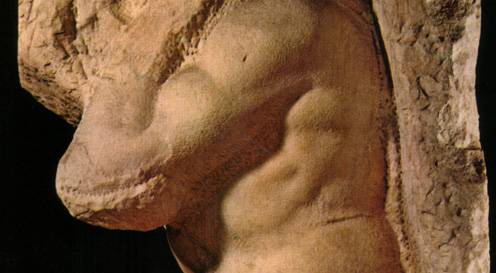 A sculpting technique that literally means unfinished figurative work in stone. This can be by accident or by a conscious decision from the artist before commencing work on the sculpture. Non finito sculptures are unfinished, because the artist only sculpts part of the block of stone. It gives the illusion that the figure is stuck within the block of material.

As for the deliberate act of ‘non finito’, it was pioneered by Donatello, and it has subsequently been used by Michelangelo, Rodin as well as numerous other artists.

While Michelangelo is best known for masterpieces such as his David and Pieta, he is known for his non-finito sculptures symbolising the Neo-Platonic theme of the struggle to transcend physical form. An example is St. Matthew and the Slaves which has influenced the works of Auguste Rodin.

The resultant figures are vague and faceless persons, who are struggling to emerge from masses of marble. There is debate as to whether Michelangelo left them intentionally unfinished.