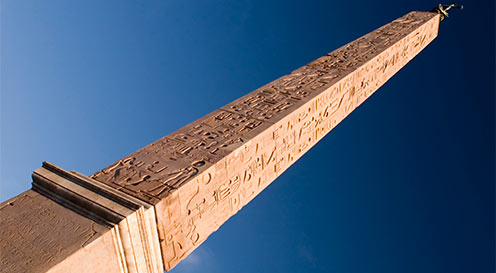 A four-sided shaft of stone tapered and with a pyramidal apex at the top. Obelisks are somewhat useless but have been used as monuments ever since the ancient Egyptians developed a fondness for them.

The Egyptians placed Obelisks prominently in pairs at the entrance of their temples. Obelisks are often monolithic sculptures created with great accuracy and skill. Without modern technology, it would have been very difficult both to make them and to erect them in front of temples. It is something, that along with pyramids, have fascinated egyptologists for a long time. In 1999, Roger Hopkins and Mark Lehner finally managed to erect a 25-tonne obelisk after several failed attempts.