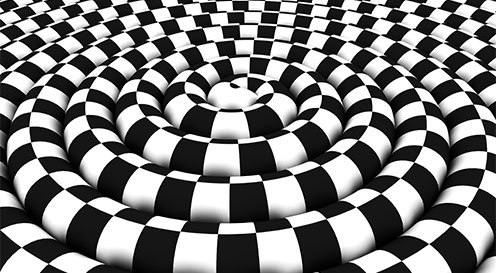 Op artists create optical art, or optical illusion art, known as op art. is a type of art which very deliberately uses optical illusions to great effect. Proponents are artists such as Bridget Riley, Victor Vasarely, and Jesús-Rafael Soto. Much of this particular kind of art is created in black and white. Many artists who would not consider themselves op artists either are or have directly influenced Op art. Escher and Albers are two good examples.

To begin with, the art shared intellectual space with kinetic art. Whereas kinetic artists were attracted by the possibility of real motion, Op artists being drawn to virtual movement. Both styles are purported to have been launched with Le Mouvement, a group exhibition at Galerie Denise Rene in 1955.

Op artists share interests with neuroscientists and cognitive psychologists in the act of exposing how our brains are fooled by what we are seeing, creating visual perception at odds with what is actually being presented as simply flat colours and shapes.

You can read more about Op art on this site and look at other art movements here.