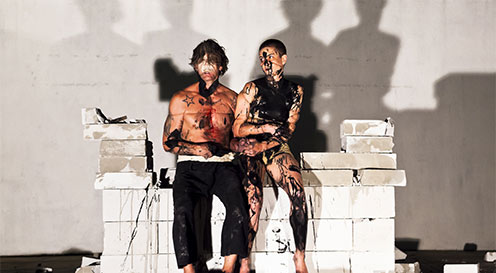 Performance art has been known under several synonyms such as realisation, happenings or manifestations. It is an extension of the art form ‘environment’, and often interacts much with the viewing or partaking audience. As such, they may be brief dramas incorporating all other forms of art, and media such as video and lights. They may juxtapose symbolic, vague or disturbing scenes.

Performance art is one of the most misunderstood genres of art. This is both because the general public – certainluy in Europe – tend to think of it as waste of tax payers’ money, and because collectors have no handheld and marketable piece of art after the performance. Some of the critic levied at performance art is possibly due to a set of wrong set of expectations or even by taking something seriously, which was never intended to be anything but light-hearted entertainment at an exhibition.