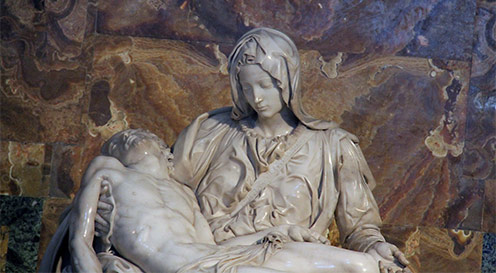 A painting or sculpture showing the Virgin Mary and the body of Christ. A Pietà is thus a devotional motif from Christianity and mostly found in the context of Church art and decoration. There are few other synonyms used to describe Pietà. One is the German word Vesperbild, and the French Vierge de Pitié.

“The Pietà” is a work of Renaissance sculpture by Michelangelo Buonarroti. It is situated in St. Peter’s Basilica within the Vatican City. It is the first of a number of works of that particular theme, completed by the Italian artist.

One of the problems of depicting that particular scene – so central to the Christian faith – is the scale of the two bodies and the age of the sitters. Some artistic freedom is necessarily applied to make it all work. For instance, Jesus would be a 33-year-old man and his mother probably an older frail woman struggling to carry the weight of her son.