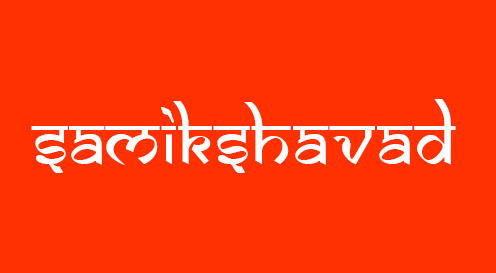 An Indian art movement dating back to 1974. It began life with art as a political manifestation against the turmoil, civil unrest and corruption of the age. Therefore much Samikshavad has a nerve and a narrative as expressed through the synthesis of modern elements, and things inherited from classical Indian art. It has no or little connection to Western art. For the Indians themselves, one important point of departure is that Samikshavad is concerned with what’s happening outside the indiviual, whereas much western art in the period concerned the inner life of the artists. While it is a sweeping generalisation which offends many, there is perhaps a kernel of truth in that.

As an artform Samikshavad is symbolic. It clearly also has some sad, but equally ironical and satirical references to a time and age that requires insight in the current affairs of india from the 1970s and onwards. For those of us who are not that well versed in recent Indian history, it is an opportunity to be drawn in or just enjoy the art for esthetic reasons whether we get it or not.

Samiksha is the Indian Sanskrit term for criticism of society. A manifesto of the movement was published at the first exhibition at the AIFACS Gallery in 1979 at Delhi.