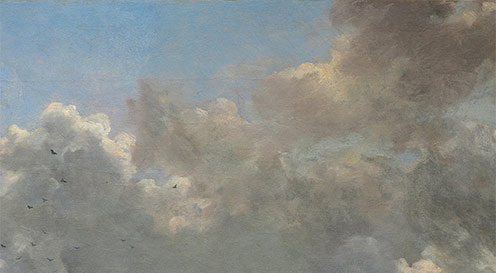 In painting, scumbling is a technique of applying a thin layer of paint over a previously painted and dry surface. The often semi-transparent effect is aimed at altering the colour of the surface without totally obscuring it.

It is similar in appearance to glazing. However glazing is even, and scumbling applies pigment mostly on the peaks of the linen and not down in its valleys. Another difference is that it is applied with light colors over dark. Either way, the colours mix optically from a distance rather than on the palette, which might give the area a sense of being shimmery.

Scumbling is used to lighten up things, whereas glazing shifts not only the tone darker but also shifts the hue slightly. For skilled painters it is an important technique at certain stages in the development of a painting. Some motifs are near impossible to paint in acrylics or oil without the technique, and cloud formations is one of them.