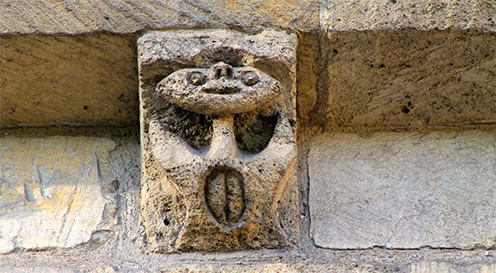 As figurative carvings, Sheela na gig figures portray women who are exposing their vulva. The features are highly stylised and exaggerated. The carvings are gargoyle-like sculptures and architectural grotesques usually found on churches and castles. They have been widespread in Europe though little is known about their exact purpose other than the popular notion of them warding off evil spirits along with their cousins, the gargoyles.

The highest concentration of surviving Sheela na gigs is to be found in Ireland, where there are approximately 100 of them left. In Great Britain, there are about 45 of these fascinating yet bizarre pieces of decorative art. Even the etymology of their name divides linguist and other scholars. While the name was first recorded in Ireland, it does not have a direct link to Irish Gaelic. While the carvings tend to appear on Churches some believe they date back to a pagan era that predates Christianity in Ireland.

Recently, Sheela na Gigs were introduced on the exterior decoration of Grayson Perry’s ‘A house for Essex’, which depicts the life of the fictitious Essex girl Julie, who was tragically hit by an equally fictitious curry delivery man on a red Honda moped.