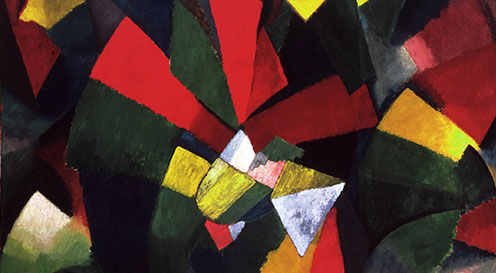 Synchromism is commonly misspelled Synchronism. Whatever the spelling, it is a style of abstract painting developed by Morgan Russell (1886-1953) and Stanton MacDonald-Wright (1890-1973). The style is also considered an art movement founded in 1912 and really coming to the fore in the 1920s as pioneers in American abstract art. The painting style is characteristic for its emphasis on colour in large geometric patterns.

Synchromism is based on the premise that colour and sound are similar phenomena such as vibrations. The idea is that colours in a painting can be orchestrated in a similar way that a composer arranges notes in a piece of music.

The Image above is a part of Synchromy in Orange, To Form, oil on canvas, which was painted Morgan by Russell, ca 1913-14.