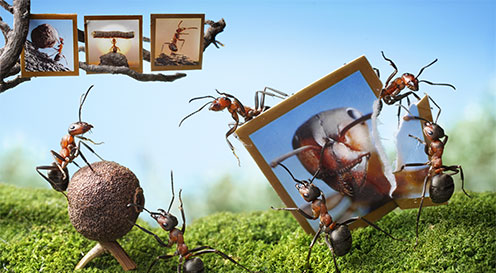 Today Telematic art is a label used to refer to interactive art using the internet and other digital means of communication, such as email and mobile phones.

However, the idea of telematic art dates all the way back to the beginning of the 20th century when European artists saw the potential in remote art by telephone collaborations.

The British artist Roy Ascott coined the term telematic art in the early 1990s, though in the late 1970s, Alain Minc and Simon Nora first applied the word telematic (i.e. without ‘art’ added) to conceptualise the way computers transmit information.

Telematic art is one of the more theorised directions of art, and it is partly because the human interaction is considered a big part of the medium and the art itself. Although arguably, the same could be said about much other art, telematic art purports to challenges traditional relationships between active viewing individuals and passive art objects.

It does so, it is being said, by “creating interactive, behavioural contexts for remote aesthetic encounters”. Telematic art should not then be confused with the much wider concept of digital art. The tautological word ‘interactive’ holds the key to the understanding of it being a more participatory art than e.g. a digital print on your wall.

Telematic art is dead or alive or simply morphing into something else. With the digital infrastructure and its rapid evolution, art and performance are increasingly referred to as Transmedia Storytelling where the art appears to have a narrative.