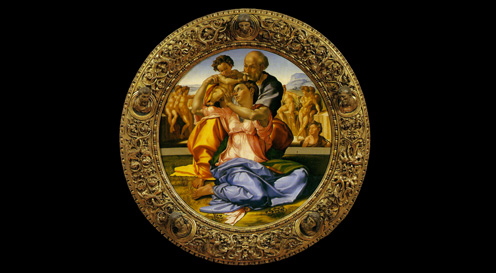 Derived from the Renaissance Italian Rotondo for round, a tondo is a circular painting or sculpture. For paintings the term is, however, not used for canvases less than two feet in diametre, thus excluding many round miniature paintings. Allegedly, size does not matter with the sculptures. In plural, i.e. when there is more than one tondo, you refer to them as either tondi or tondos.

Tondi in art goes all the way back to Ancient Greek times. Round compositions are notoriously hard to master, because the eye is led around in ways that does not anchor it to a focal point as easily as compositions on rectangular formats which adhere to the principles of the golden section.