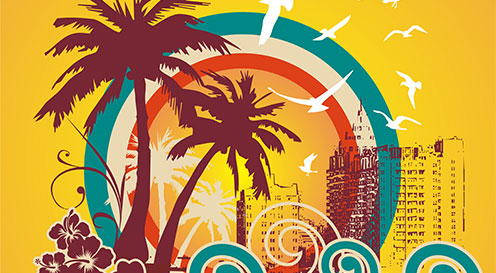 Tropicalismo (Tropicália) is a Brazilian art movement which took its name from the title of a work of art by the name of Tropicália. The art was an installation by the visual artist Hélio Oitici (b. 1937 – d. 1980), who added tropical props to this work in 1967. This Brazilian take on the tropical was replete with live plants and parrots, enclosures modeled on favela architecture, and a television set.

The art movement flourished for a mere five years, from 1967 to 1972. Yet it has put Brazil firmly on the world map of creativity. Tropicalismo soon encompassed visual art but became more associated with other forms of art such as theatre, poetry, and music. It is considered an explosion of cultural creativity in Rio de Janerio and São Paulo after Brazil’s military regime tightened its grip on power in 1968. Despite the latter, the resultant art carried on being sunny, optimistic and cosmopolitan. It all ended abruptly in 1972 when the then military regime clamped down hard on the freedom of expression.

The movement was characterised by a combination of the popular and the avant-garde, as well as a fusion of traditional Brazilian culture with foreign influences. A key principle of Tropicália was antropofagia, a type of cannibalism of existing culture to encourage the conflation of other influences in order to create something unique. The idea was originally proposed by the poet Oswald de Andrade in his Manifesto Antropófago of 1928.

Hélio Oitici, however, is more broadly known for his participation in the short-lived Neo-Concrete Movement together with artists Amílcar de Castro, Lygia Clark, Lygia Pape, Franz Weissmann and poet Ferreira Gullar. Today Tropicália is mainly associated with the musical faction of the movement, which merged Brazilian and African rhythms, and bossa nova. Musicians who participated included Caetano Veloso, Gilberto Gil, and Os Mutantes.

Finally, Tropicalia is a documentary film directed by Marcelo Machado and co-produced by Denise Gomes and Paula Consenza.