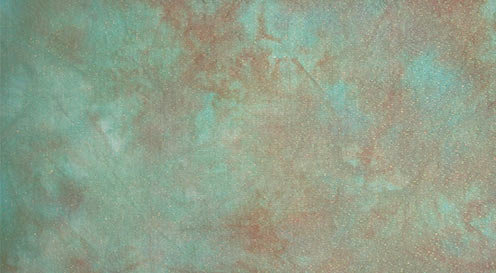 An unstable pigment made from copper acetate also known under different other names such as Grünspan, Verderame and Vert de Gris. Verdigris is derived from the old French word ‘Vertegrez’ which meant the green of Greece. The paint using the pigment is slightly transparent bluish green. It is not often being used in our age unless you are an art restorer of works from the antiquity, middle ages or the renaissance. It has been favoured by some artists up to the 19th century, because it helped produce a vibrant green when mixed. In addition it was excellent for glazing. However, due to its instability it had a tendency to age disgracefully turning brown and dull.

Originally it was produced by the chemical reaction between grapes from wine production, ammonia and copper plate. The process resulted in a blue-green crust on the copper, which was then scraped off and ground into pigment powder.