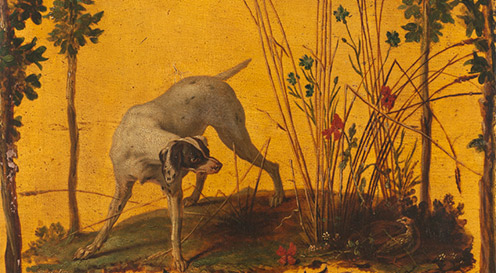 Vernis Martin is a generic term that became established around 1760 and today it denotes eighteenth-century French lacquer produced in the manner and style of the Martin Brothers. Guillaume, the eldest brother, opened a lacquer workshop in Paris around 1710 with his siblings. Around 1728 the Martin family develops an imitation of copal-based lacquer, designed to compete with lacquer work from China and Japan. Their technique was less costly for the decoration of furniture and lacquer panels and their finish was less brittle and prone to cracking due to a trade secret that made the lacquer somewhat more elastic. The work soon became popular and served to harmonize furniture with a large curvature, because lacquered areas ordinarily would not perform well on curvature.

The lacquer contained reddish warm-toned shade of bronze and gold powder and was applied as several finishing coatings on top of green underpainting followed by e.g. a red coat and gold leaf. Remaining a secret to this day, it has been speculated that the lacquer was produced by heating oil and copal and then adding Venetian turpentine. Copal is a particular resin sourced from the tree Protium Copal (Burseraceae) in South America.

The French brothers Guillaume and Etienne-Simon Martin tapped into the French fascination with all things oriental in their age. They imitated Chinese lacquer on European subject matters and applied their decorative arts to a wide variety of items, from fans, furniture, panles, to coaches. Highly praised by Voltaire, it suddenly made affordable to acquire imitations of the East Asian lacquerware that imported into France during the Louis XV period.

The family also invented the lacquered papier-mâché snuffboxes in the 1740s. They were an instant hit because they looked great and at the same time were light and inexpensive to manufacture. They clearly competed with snuffboxes made of gold or gold-plating. In addition, the family’s lacquer art got influenced by the decorative techniques from the goldsmith’s art and oil painting. Slowly but surely, the Martins completed its dissociation from East Asian lacquer. It heralded the beginning of what we now know as the great French tradition of furniture and decorative arts, with France spearheading lacquer work in Europe.