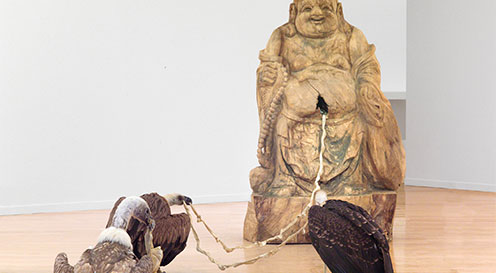 1980s Chinese art group spearheaded by Huang Yong Ping, a self-taught artist influenced by Joseph Beuys a well-known German artist and art theorist, John Cage an American music theorist and philosopher, and Marcel Duchamp a French artist associated with the Dada. Xiamen Dada protested against the influence of socialist realism from the Soviet Union, through absurd art and performances. Along with the original European Dada, accident plays and important role in the creation of art. Yet the accidents that the artist chooses to keep is by no means accidental. One of Xiamen Dada’s party pieces is to ridicule the Chinese tendency to ape Western art without real understanding. It mocks this blind adoption of influences because it is divorced from cultural contextualisation.

Return to the art glossary
Return to entries beginning with X