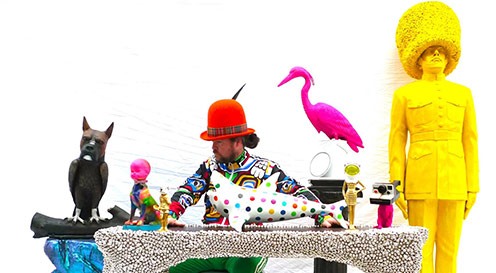 a love of eccentricity

The artist Finn Stone (b 1971) lives and works in London as an artist and designer. As an equally playful and bright spark, he has several public space sculptures, paintings, and furnitures on ‘his conscience’. So far, he is best known for his polyethylene ‘Ball Chair’ which is being sold worldwide, and his one-off paintings all meticulously made up from paintbrushes.

Humour plays a big part in his flamboyant work. I.e. not in the sense of some contrived intellectual brain fuck, but as sophisticated visual puns that project a refreshing joy of life. The objects are precisely the sorts of exuberant things that make you smile—even when you are least in the mood of smiling. One thing is for sure about Stone’s contribution to art and design. If we were to choose our own legacy, that would certainly be up there amongst our favourites. It’s all like that proverbial fart in the funeral procession, that we so desperately need to get through the day.

Whilst having an affinity with great many materials, Finn Stone is fond of working with aluminium and fibreglass. He upcycles found objects and re-purposes everyday household items such as Lego and toy cars. Take for instance the kingpin desk made from Resin, leather and 1000 silver studs or the Cyberdog wall lamp which applies a 70s TV case to the design. It is stuff you just have to have.

But more to the point Finn Stone’s work is bold and significant when you see it in the context of our age. You see the fact that art can be useful in more than its aesthetic sense; relegates his genre to being neither art nor design by people stuck in the past. Of course, in the not so distant future, we may all regard that as a misnomer because the work is as much art as it is design

The overlap is intelligent and potent stuff, indeed

In fact, what is daringly pushing the boundaries these days is neither shock art nor minimalism nor concept art.

No, it is fine art that also has a functional design element to it.

It is daring because it goes upstream and carries a heavy cargo of otherness when considering the past. Before the first world war, the avant-garde, as the elite was called then, quite quickly decided that the philosophy for producing design and art were two very different entities.

For a start, design underwent a terrible clean-up act, though the upshot of that spring cleaning was democratised and mass-produced design we could all afford. However, for the modernist purists, design equated to 90% functionality ever after. And, though never spelled out explicitly, the remaining 10% aesthetics should somehow just take care of itself. It was understood that an ergonomically designed chair, say, would simply create its own kind of beauty. Besides that, furniture- and industrial design soon got very serious indeed. Where furniture used to have charming quirks – as lent from its originator – it now obeyed the new dogma like a religion.

Fine art fared no better in terms of tunnel vision. Beauty, for instance, became a swear word. In retrospect, it was a legitimate reaction to centuries of slavery to the beauty doctrine (cf academic art). Fine art was now easel art, readymades, land art, sculpture and performances. The latter got somewhat schizophrenic and saw themselves as happenings for a period in the seventies.

In that age, the intersection between furniture design and art were frowned upon and referred to with a certain frostiness. Granted, there were rare exceptions. Think here Verner Panton and his Plastic House (It might help to take LSD to keep up) or Salvador Dalí with his lip sofa, hands chair and lopster telephone. Those stunts were just about tolerated because Dalí was an eccentric genius if not certified fruit basket.

But with the postmodern 1980s, high society suddenly warmed to Il Banale furniture from Italy. Fast forward to the 1990s, we witnessed a refreshing urge for not being too far up our own backsides. All of a sudden, it was welcome to inject a bit of humor, satire and quirkiness in both art and design. In came the Kitsch, the lowbrow, Japanese superflat and the pop-surreal revival.

Fast forward to 2015-2016, and there are still only few who really work comfortably in that grey zone where the object is as much fine art as it is design. Finn Stone happens to excel at that hot frontier that neither wins you a Red Dot design award nor much column space in Artforum Magazine. 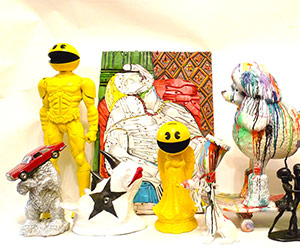 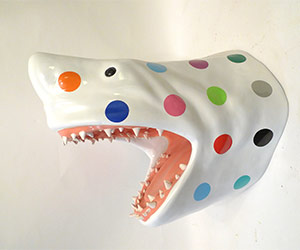 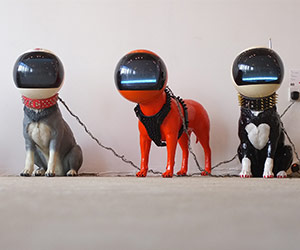