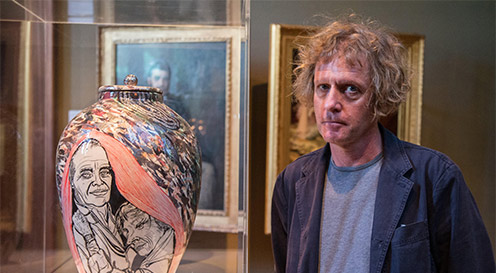 The tranny potter Grayson Perry (b 1960) is best known for his extraordinary art, though he is suprisingly modest about its graysonesce uniqueness. “Originality is something for people with short memory” he says and then adds: “I copy something a bit wrong so that it becomes new, and by trying not to be original, I have a distinctive voice”. His visual vocabulary is more of an individual vernacular and it takes a little getting used to. Take for instance, his pottery and you could be greeted by rebuses such as W + the sign of an anchor, or orbital ornamentation consisting of erected penises. Whatever it is, the art is always narrative in character and often it offers social commentary and loving mockery of pretentiousness.

Perry is an award-winning draftsman, sculptor, potter and performance artist who won the Turner Price in 2003 and knighted with a CBE a decade later. In 2015 he was appointed to succeed Kwame Kwei-Armah as chancellor of University of the Arts London. His open transvestitism is part and parcel of his public appearance. It is also an entertaining asset for the rest of us. Perry’s alter ego, Claire, is a flamboyant lady, and an Essex girl at heart who dresses in Dame Edna-like outfits of poor taste, all referred to as ‘claires’.

For a successful international artist, he considers himself unusual in the sense that he does not employ assistants. He is painfully aware that it limits his output, and to some extent his income potential. However, he argues that he likes to conduct his own quality control on everything he does. According to Perry, art is a series of controlled accidents, and so for it to be Grayson Perry art, it must contain his own mistakes and not those committed by another person.

The artist is increasingly considered a national treasure because he has a way with words. He possesses a quick wit in debate which is marinated in his dry sense of humour. As he is equally insightful and entertaining about art; broadcasters frequently invite him to comment on contemporary art. As an example, he has appeared in the venerated Reith Lectures BBC, The Culture Show BBC2 Arts Magazine, Brilliant Ideas Bloomberg, and countless interviews in the Guardian Newspaper on art. In addition he shows up occasionally in more light-hearted shows such as Have I got news for you BBC, and Loose Women ITV.

A big part of Perry’s work revolves around Identity. For many years, his autobiographical work externalised his childhood experiences such as the missing father role model or his teddy Alan Measles as a surrogate father instead of his stepfather. His drama-queen mother receives some mention as does his model aeroplanes and his very own trans-gender questions. Later on his career, he has concerned himself far less with his own ‘baggage’ and far more with society at large. It had to follow that order. Perry’s life disintegrated somewhat when he was fourteen, and he has since invested some time and energy in counselling. He regards psychotherapy a little like sorting out one’s garden shed. You know a garden shed tends to be full of useful tools. But when everything in there is a messy tangle, then it makes sense to pull it all out piece by piece and put some of it back in order.

A sub-theme in Perry’s preoccupation with identity is the notion of class. He is profoundly interested in how it determines not only our tastes but also our choices in life, and how we think about just about everything. Beyond recognising that impulse control has some say in where we end up in life, he occasionally questions how mobile social mobility really is. In 2012, his interest in the topic resulted in a three-part TV documentary called ‘All in the Best Possible Taste’ as first aired on Channel 4 and winning a BAFTA as the Specialist Factual Winner a year later. Perry presented the documentary on the premise that Society is jungle full of taste tribes directly linked to class stratification. So he embarked on a personal taste safari whilst adopting a novel format consisting of ‘class specimen’ interviews, anthropologist’s statement, and his own artistic interpretation thereof. His art was that of conceptualising tapestries to illustrate each class. For instance, the middle class got treated to two tapestries depicting their anxiety-laden business of being middle class. The process involved his idiosyncratic hand drawings, which were then imported into Photoshop, and then the tapestries were machine-woven in Belgium.

Julie’s house is a fairly recent addition to the artist’s oeuvre. FAT Architecture and Perry co-created the holiday home in Wrabness, Essex following the artist’s vision. The somewhat eccentric structure overlooks the River Stour. The concept house, which has some parallels to Dalí’s Cinema museum, encapsulates the story of Julie May Cope. Julie is a fictional Essex woman based on all things stereotypical and existential for an Essex girl in our present age. Sadly Julie passed away from injuries sustained from the freak accident involving a delivery man on a moped. It makes the house a kind of mausoleum to a fictional character replete with her achievements and the display of the perpetrator’s moped repurposed as a chandelier.

Decoration is just about everywhere. Outside the house, there are green external tiles depicting Julie’s rock-chick youth. Inside you find colourful tapestries recording her life’s full narrative.

Grayson Perry is also an Author and illustrator of the following book titles here listed in chronological order:
Playing to the Gallery: Helping contemporary art in its struggle to be understood.
The Vanity of Small Differences, (Co-authored with Suzanne Moore, Adam Lowe and Caroline Douglas).
The Tomb of the Unknown
Cycle of Violence 2002, written a decade earlier and dealing with uncomfortable if not creepy aspects of a traumatised childhood.