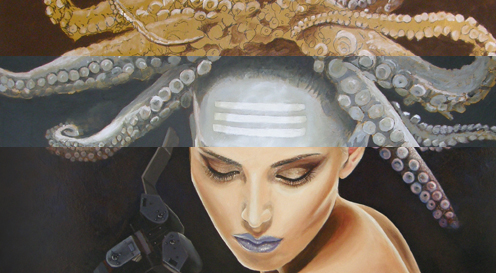 Why paint over perfectly good work?

As anyone who has ever tried to paint an interior wall would testify, covering a dark area with white paint takes more than one coat.

The same goes for a painting canvas. Paint, however well it covers the chosen painting medium, is semi-transparent. As much as that can be a pain, as much it can be used to similate the real world where the light travels through tissue and surface and is bounced back at us creating a sensation of form and depth.

Just how transparent paint is, comes down to how much binder versus pigment. If you buy professional grade paint, it has a higher pigment load. If you buy cheap and nasty student grade paint, then you are glazing your way to the finishing line.

If one accepts the premise that paint is not opaque, it provokes the question: should we prime and underpaint or not?

It is a very individual choice for every painter out there, and it is subject to heated collegial debate amongst artists. Great observation, skill and ‘mileage’ are fundamentally more important for a degree of realism, say.

In that sense, you can achieve anything with successive layers of paint. At the same time, a great many artists produce breathtakingly beautiful paintings, which have been painted in one go. This is called Alla Prima or all wet in wet. Certainly, ever since the invention of tubes containing synthetic pigments of high pigment load, Alla Prima has been the preferred route to great paintings. On a white primed canvas, the light bounces beautifully back from paintings painted in a one-colour layer.

Now there are more ways to under paint than you could throw a stick at. There are the tried and tested Old Flemish, Venitian, or French methods focusing on value layers. There is even the old mixed style where a mix of paint medium is a variable at play. The initial work would be done in egg tempura and the finishes in oil. Similarly, contemporary artists may work in acrylics all the way through or do the under painting in fast-drying acryics and finish off in oils.

Even within specific schools of painting, there are variants to each stage of the painting. For instance, Imprimatura can be Ochre, Sienna, Black, Red Bole, Pink or whatever else the artist fancies.

The Flemish old masters invented the oil painting. Initially, they worked on wooden panels later on canvas. For a long time, they primed with gesso made from rabbit skin glue and chalk. Then they under painted in egg tempura, followed by oils. Later again they did most of their work in oils. They began with a brown/yellowish tinting of the painting medium, a semitransparent brownish underpainting was created called Bistre, and on top sometimes cooler layer.

The Venitians whole-heartedly adopted oil painting from the Flemish, mostly because their Italianate love affair with Fresco painting didn’t really work locally due to the varied levels of humidity and temperature in the laguna. They introduced a greenish dead layer called Verdaccio, which incidentally made flesh tones rather convincing.

The classical French way of painting involved establishing the initial structure of a painting and all the correct values in a range of grays from white to black. This single carefully rendered layer was called Grisaille, which simply means greyscale. Once this task was completed, then the work would slowly but surely turn into colour through fat over lean over fat colour through many successive layers of glazing which got oilier and thinner as the painting progressed. A variation to the Grisaille is the Brunaille, which is a range of browns instead of greys. The idea here is to retain some more warmth in the initial work.

In the 20th century, many artists for whom under painting was still in practice, blocked in colours in various ways. For instance, they could choose to under paint in complementary or opposite colours. Alternatively, they could work from dark to light, and textbook example is work from Picasso’s blue period.