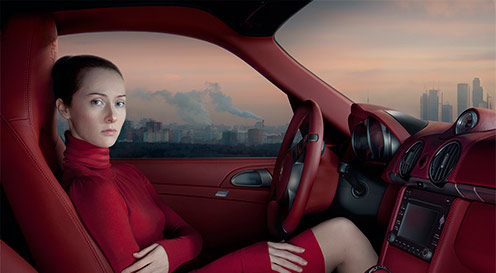 Russian-born award-winning artist Katerina Belkina lives and works in Berlin. She is perhaps best known for intriguing if not mysterious solo portraits of women. But in a series called Light & Heavy, she has recently returned to equally dynamic compositions featuring several women at the same time.  The latter are composited within perfectly sand-blasted and at times alien environments. You know the type of buildings alluding to Soviet architecture of unquestionable masculine rationality; and yet utterly unfit for human dwelling because it is deprived of individuality.

I am trying to explore the woman inside me, and accept my weaknesses and fears. I’m discovering human emotions, fears, hidden wishes, internal processes and show them from a female perspective 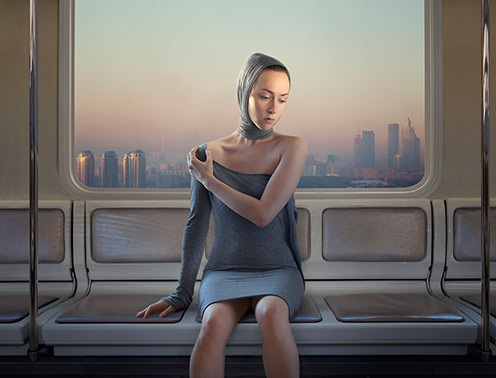 The artist works in series which are the result of having chosen a topic of interest and summing it up in one or just very few words. E.g. Revival, Not a Man’s World, Hieroglyph, Home Work; Empty Spaces. The same word economy is aptly applied to each work of art. In these serial explorations, she uses herself as a motif captured through a camera fixed to a tripod. But she is not necessarily herself in these compositions. At times, she is a stand in in the service of conveying meaning or to depict an emotional state within the narrative. Of course, many aspects of her work clearly reflect personal experience. The Race, for instance, is a take on the quest of many fellow Eastern European women. The quest is that of finding a successful man.

Entreaty (see below), is also not autobiographical as much as it reflects the sometimes mixed feelings shared with many women when becoming an expectant mother. 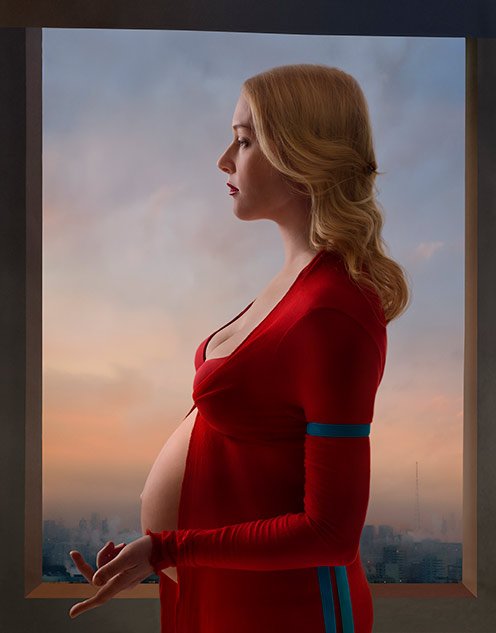 For Belkina, photography offers the basis for total freedom throughout the artistic process from shutter speed and aperture to extensive yet subtle image manipulation. There is the act of compositing everything seamlessly and colour-correcting the many layers of elements to create a whole new world in a somewhat painterly way. Often enough, she sets out with an abstract idea, which then leads to a choice of subject. From then on, the planning of composition and other details help her prepare sketches and have everything ready to begin photographing. However carefully planned, welcome opportunities arise to improvise along the way. Yet once things settle, Belkina invests many hours on post-production image manipulation and retouching, achieving the precise mind-boggling concepts we have before us. Like anyone else in art, she has several influences, but by the end of the day she insists on being herself on her own terms.

if you can’t be yourself as an artist, who can you be?

The artist is getting noticed purely on the strength of her work, and she has recently (2015) won the International Lucas-Cranach-Award, the International Photography Award (IPA) in 2012, and Px3 for portraiture in 2010. In addition, she was nominated for the Kandinski Prize in 2007, which in Russia is on par with the Turner Prize in the UK. Clearly, for that to happen in our age, an artist can no longer concentrate solely on producing fantastic art. No, you have to share yourself tactically. You have to mount exhibitions in galleries and art fairs. So in common with many other artists, Katerina Belkina has a punishing time schedule requiring relentlessly high work ethics. So far she has exhibited solo and group shows in far-flung places such as Austria, Belgium, Canada, China, Germany, France, Korea, Hungary, Italy, Malaysia, Monaco, Netherlands, and the USA.

To find out more about the artist, please visit her official website.

Image credits:
© All images courtesy of the artist Katerina Belkina, all rights reserved. 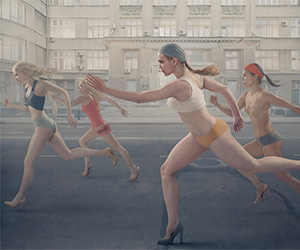 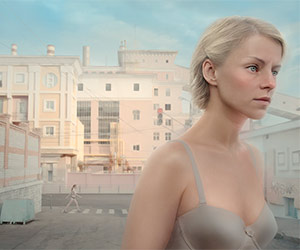 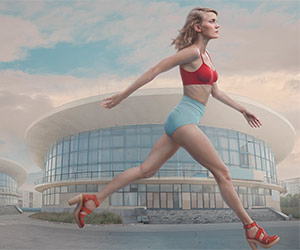