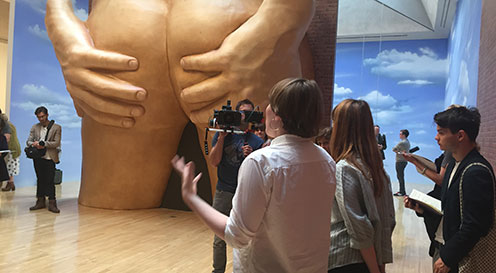 One of the defining characteristics of the 1960s is that the idea of an independent curator came to the fore. Perhaps this is not surprising given that the 1960s was a period of liberalisation of the cultural and political agenda and furthermore culture became a vehicle for protesting against the establishment. In the 1960s the curators also began to question their role within the art establishment and started to emerge as a more distinct profession in their own right. According to Susan Crean “ (it is in the 60s) The independent curators have separated the work of preparing exhibitions from the task of keeping collections (Rakier, Schavemaker, 2007: p148) With this in mind, the role of the curator moved away indefinitely from just a caretaker position. An influential Swiss Curator Harald Szeemann led the way and he is referred to as the pioneering figure that is often credited with the concept of an independent curator.

Szeemann defined himself as the “Ausstellungsmacher” a maker of Exhibitions (Obrist, 2008: 79) and Jennifer Allen, in her talk titled “Care for Hire” refers to Szeemann as a legendary figure who has heroically broken away from his institutional expectations. After he was rejected by the commission of Kunsthalle Bern, with regard to the Joseph Beuys exhibition, he resigned and on that same year he formed his infamous Agentur für geistige Gastarbeit – the Agency for Intellectual Foreign Labour “By casting the freelance curator as a temporary foreign guest, Szeemann mapped out a resolutely international freelance curatorial territory.” (Rakier, Schavemaker, 2007: p148)

His signature exhibition “When Attitude Becomes Form: Live in your head”, combining works of 70 artists including Joseph Beuys, Richard Serra, Eva Hesse, Lawrence Weiner, Richard Long, and Bruce Nauman, became the first exhibition of its kind which redefined the role of the Curator. “By taking risks, being entrepreneurial, creative, risk-taking, making things happen and keeping it going. Szeemann stated that every project was an adventure, but starting again with every project” (Irving, 4.8.2009, Independent Contemporary Art Curating: – Harold Szeemann)
In his interview with Obrist in 1996, he defines the role of a curator as; ‘The curator has to be flexible, sometimes he is the servant, sometimes the assistant, sometimes he gives artists ideas of how to present their work; in group shows he’s the coordinator, in thematic shows, the inventor..” (Obrist, 2008: 100)