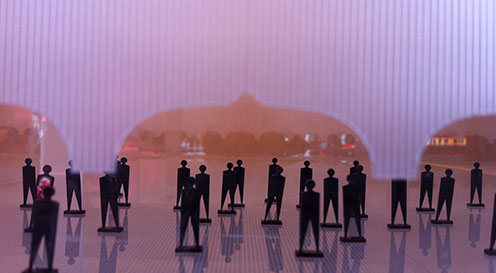 It is argued that one of the most characteristic features of the curating scene in the 1990s is the proliferation of “exhibition making” practices. Following the slow brewing effects of changes over the previous decade, much more flexible models of exhibiting started to take place and, most importantly of all, new curatorial ideas and experiments and multi disciplinary co-operations sprang up. Over the plethora of biennials, experimental exhibitions and international programmes, alongside freelancers, the “Super Curators” or star exhibition makers started to make headlines.

The most prominent example of this new breed of curators is the Swiss National and current co-director of exhibitions and programmes at London’s Serpentine Gallery, Hans Ulrich Obrist. He was described as “one of the most active and well-networked figures the contemporary art world has seen. It has been reported that since the beginning of the 90s he has curated more than 150 shows around the globe. He is also the first curator to top Art Review magazine’s “power 100” list for 2009 – who’s who to contemporary art. (Evening Standard, 22.10.09, Hans Ulrich Obrist – the God of planet art)

In his book he describes the function of the Curator as: “The curator should be like a dervish who circles around the artworks, there has to be a complete certainty on the part of the dancer for it all to begin, but once the dance has started it has nothing to do with power or control.. I also like the idea of the curator or critic as a supplicant. It’s about forgetting everything you think that you know and even allowing yourself to get lost”. (Obrist, 2008: 235). For him the aim of the profession is “not to follow the anti-museum activity of the 60s or 70s, but more or less welcoming an era for “in between spaces”. He goes on to describe the curating in the mid nineties as “IN – BETWEEN displaying and concealing, near and far, concentration and distraction, fragment and connection, original and copy, affirmation and negation, horizontal expansion and vertical depth. From maximum exposure to exhibitions on the verse of invisibility: back and forth”. (Obrist, 1997, In the Midst of Things, At the Centre of Nothing, A&D Vol 12: 86)

At the same period, despite the fervent activities of curators around the globe, and energy within there was much criticism levelled at curators as well. In an article entitled Museum Curator to Exhibition Auteur, Nathalie Heinich and Michael Pollack argue that this further “crisis” of the profession of curator was due to a number of factors, such as the rapid increase in the number of posts, widening recruitment criteria, and the opening up of entry routes into the profession, increasing the diversification of institutions as well as increasing specialisation among curators. (Greenberg, Ferguson, and Nairne, 1996: 232)
Melanie Townsend in her book Beyond the Box, argues that in the 1990s “The idea of curator as “auteur” stamping their mark on the exhibition has become a flashpoint in the “crisis of authority,” wherein the notion of the curator as author is placed under interrogation. Who is speaking for whom? Where are the artists and the audience presentation and interpretation of contemporary art?”. (Townsend , 2003: 18)