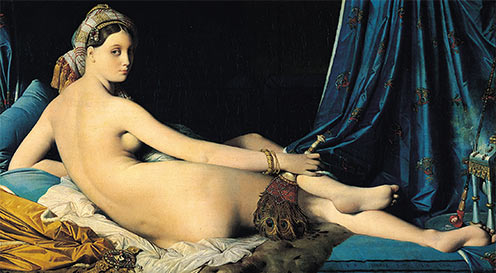 exotic mix of arse and tits

As a largely French and British obsession, orientalism appears to celebrate a heavy and mysterious cargo of otherness little understood in its own age of imperialism. It did not prevent the art from being consumed like Turkish delights by collectors, and from being ridiculed by the intelligentsia ever since.

Orientalism was the East as seen through the blinkered goggles of the west and it soon became one of the largest crazes of the 19th century. Its legacy is broadly summed up as influences from Middle Eastern, North African and West Asian cultures in visual art, literature and architecture. It borrows liberally from territories still influenced by the Arab expansion and end up as a facination amongst 19th-century French academy painters. The artists enjoyed the licence of producing more wacky and daring work for purveyors of fine totty. What is more, the artists could do so from the comforts of their Parisian studios.

There were exceptions such as the 18th-century forebear to all orientalist artists of the 19th century. Jean-Étienne Liotard (1702–1789), actually visited Istanbul and produced several pastels of Turkish domestic scenes. As an eccentric belief in the virtues of method acting, perhaps, he insisted on wearing Turkish attire in Europe. Later the romanticist artist Eugène Delacroix spent some time in Marocco as a form of pleasant escapism from Paris.

The styles of orientalist art are idiosyncratic. Aside from depicting the Napoleonic invasions of Egypt and Syria, and some architecture- and landscape scenes, there is an emphatic fondness for harems.

The harems are featuring voluptuously well-fed nudes with ample buttocks, whose depictions sum up the pinnacle of female beauty of the age. Well at least from a male perspective. It contrasts today’s popular notion of female beauty where a more heated encounter with a specimen could feel more like falling off one’s bicycle.

The Grande Odalisque (cf top) from Jean Auguste Dominique Ingres oozes of confident eroticism. It is as if she is saying “you can’t get me to turn over and face you”. Her back is extended to make this enticing pose work the way it does. Anatomically, of course, this is all horribly wrong. Her spine would have had to have three extra vertebrae inserted to make this elongation possible. It is not a reflection of the painter being ignorant. Rather he took some artistic liberties because he could.

It is – an always was – a fantasy. In sweeping generalisations, that is the essence, if not strength of the genre and why it is so intriguing. You see the irony of some of the greatest pieces of orientalism is it has been produced by artists who only travelled to the middle east in their minds. Ingres, for instance, never set a foot in the orient.

Naples was the closest this neo-classicist ever got

Ingres was acknowledged for being a great portraitist and history painter, but he was second to none in painting drapery. The old chap had to ‘sprinkle’ with the crinkly cloth at every excuse as if it was some fairy dust. For instance, he was the only painter to pull off painting the iridescence in duo-tone silk convincingly. However, in the Turkish Bath (cf round/tondo painting to the right) Ingres famously got distracted from his drapery signature style and homed in on mammal glands and backsides instead. These display-model flaxen-haired bathers have unusually fair skin. Their eyes have been turned almond-shaped as if they came from further afield in Asia. This myopic effort from the eighty-two-year-old academy artist was a composition in flesh tones only balanced by complementary shades of green. It was a magical contrivance, and all the women might have been the exact same model from Central Casting Ltd as sketched up in different poses.

While this may not a true hamam, the Islamic improvement of the Roman Bath, it is an important time stamp. At the time, Turkish baths were not only in vogue in Paris but also in Victorian London where the first Turkish bath was opened in 1860. The latter received much positive attention from the Royal Society of Medicine making it an instant fashion fad in wellness. More importantly, this time capsule shows how the high society of the two empires were geared towards trying out foreign influences—albeit with their characteristically selective magpie mentality.

The term orientalist artist is somewhat slippery. This is not just a semantic issue but also to do with many of the artists concerned being associated with other genres. Some artists only occasionally dipped into orientalism as a type of genre painting. It was not until 1893, when the style of art had all but died, that Jean-Léon Gérôme et al formed Society of Orientalist Painters (Société des Peintres Orientalistes).

William Holman Hunt and David Roberts, otherwise known as Pre-Raphaelites, and the Roayal Academist John Frederick Lewis, a British artist of German origin, produced work you could arguably call orientalist. Interestingly, Lewis lived in Cairo between 1841 and 1851. In that vain it would be tempting to include Frederic Leighton, but his skilfully executed treacle was plain and simple western mythological and biblical history painting in an anglicised idea of ancient Greece, Rome or Palestine.

Orientalism in architecture and litterature

Marvelling in its intricate geometric ornamentation, The Royal Pavilion in Brighton, England, is held out as a prime example of orientalism in architecture. Yet there are several other examples across Europe not least the Monserrate Palace in Sintra, Portugal or the Yenidze Cigarette Factory in Dresden, Germany. The point with it all has been to create and exotic almost alien extravaganza and the mission has been accomplished.

In litterary terms, Lord Byron was into the allure of orientalism in his ‘Turkish Tales’ and ‘Childe Harold’s Pilgrimage’. More recently, in 1978, Edward Said put the term ‘Orientalism’ firmly on the map again. He applied the word as the title of his publication in whihc he criticises the West for some long-held beliefs and patronising attitudes that keep framing large parts of the world as inferior and underdeveloped. 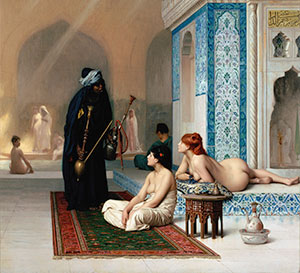 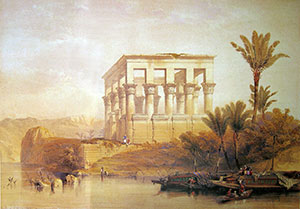 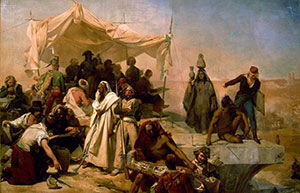 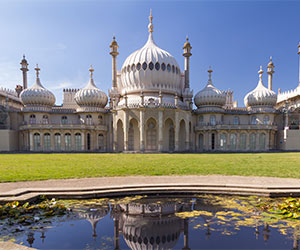 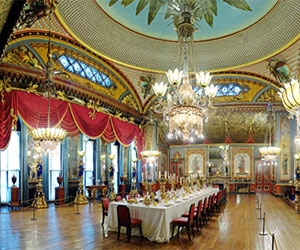 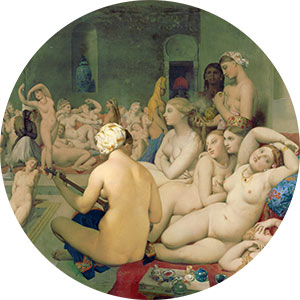