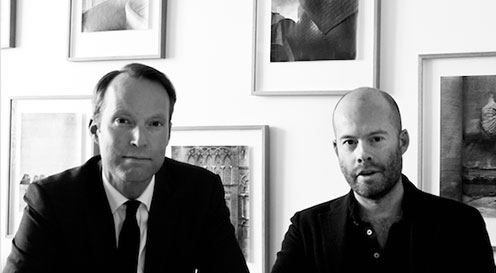 because it makes a lot of sense—that's why

There is a fairly new player in the art market bound to become at least as important a household name as artprice and artnet. Barnebys was founded in 2011 through equal parts passion and frustration. The founders Christopher Barnekow and Pontus Silverstolpe were clearly passionate about buying at auctions. However, they were royally peeved off with the sheer lack of overview in the secondary art market.

The rest is history. Today, Barnebys attracts auction feeds to its multi-language site from the majority of auction houses in Europe and North America. Their strapline is ‘all auctions in one place’, and it does exactly what it says on the tin. As a result, a million visitors call in a month. The whole concept and the robust growth in traffic have recently made Skate mention the company as one to be reckoned with in the future.

More recently, Barnebys added consignors to the equation. As a little extra, sellers can now have their antiques valued free of charge by several auction houses simultaneously.

What’s the significance of all that?

Cynics would point out that neither aggregated- nor syndicated content, as monetised through volume, are earth-shattering new on the mobile web. The great irony of cynics is that their cynicism does not offer anything novel either. In fact, it is offering diddly squat. Besides, it is missing the point entirely.

It is all about how you present the content in a way that creates true value. It is all about listening and making life easier for everyone. It is slogging away at usability into the wee hours, making it all as user-friendly and intuitive as humanly possible. It is the act of making the information inviting, sense-making and searchable.

Having everything online tabs into something called long tail economics because it breaks the barrier of scarcity and price justification for shelf space for the first time in history. Gone are suddenly concerns as to whether something is mainstream enough or popular enough to be sold to the average punter. If something is really esoteric, the global reach makes it sellable without extra cost. Call it the scalable digital marketplace if you will.

So the premise is not new, but one thing is for certain. No one had offered a proper marketplace solution for auctions before Barnebys came along. In fairness, Artnet seemed to have dabbled with a similar concept earlier, but lost its way or changed direction. The remnant is their auction house directory that is little more than a telephone book on steroids. It appeared that Artnet decided to enter the auction market directly rather than just being a partner. In turn it might explain how artnet has managed to cannibalise its own shareholder value. But that is a red herring worth frying.

As a buyer you may get a warm and fuzzy feeling about the brand of certain auction house, but by the end of the day, it is the item for sale that is more important than the auction house. For any auctioneer who feels attached and proud about their brand there is one cruel and sobering fact. If you do not sell anything to the right hammer price you neither have brand recognition nor brand equity.

A site like Barnebys makes it more transparent for everyone thereby leading to a higher volume of transactions.

Fundamentally, classical economics and behavioural economics disagree on a number of things including the existence of a rational market. But on the issue of asymmetry of knowledge between buyers and sellers, they agree that it slows down the speed of transactions, which contribute to slowing down our entire economy.

In other words, comparison is as important to us now as it always has been. In terms of competition, it may seem daft to see all art dealers or galleries on one street or all greengrocers and farmers at the open air market on in the weekend. But all things being equal, the vendors would not do it if it did not pay. Conveniently, it brings your market offering in front of more eyeballs and leads to more transactions faster.

You can find out more by visiting barnebys.com.