colour as demarcation between elements

The artists is first and foremost a sculptor preoccupied with the ways in which we communicate ideas through light, place, colour and form. As so often with established artists of merit, there is a distinctly different early and the present oeuvre. The past is remarkable, but the present is so lyrically and effortlessly balanced that it is a testament to a lifetime of dedication as an artist.

By the 1960s Jeal wholeheartedly bought into some aspects of constructivism or rather how they tackled abstract compositions. Although Constructivism was old hat then and created in a different ethos perhaps, it did have its merits. E.g. you could create this ever-changing experience when you actively involved the viewer, the base, and floor space, and by doing so you did not conform to some antiquated sculptural conventions that harked back to ancient Greece. I.e. ones that insisted on an almost static totem pole mode of signification.

“I used colour both as a demarcation between the different elements and in the very early work to create a particular atmosphere of a piece. This would often relate to the title, as in Late Spring Early Summer. Although new ideas were developing and the pieces were becoming more involved with movement, as in the large constructive sculpture of 1965, colour was used simply to define different segments of a piece, and this continued as the work became more minimal.” 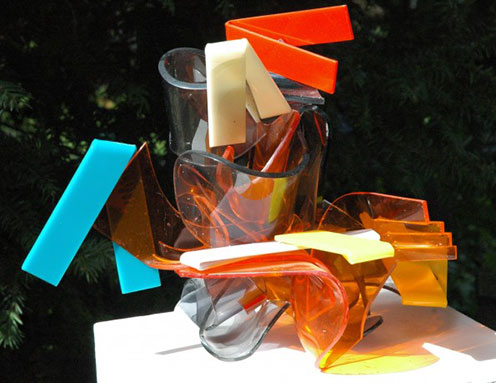 Buckminster Fuller’s ideas of doing more with less led the artist to simplify and use acrylic sheets reinforced with aluminium to give it strength. In the 1970s, the Frankfurt School of philosophers and Carl Jung had an impact on the artist as well. It resulting in work which commented on the human condition. It was a turning point creatively, and the first of these works, Table for One, made a statement about eating in solitude, and soon followed Shelter, Cripple, Famine and Hiroshima.

Cripple was about physical- as well as mental disability. The piece required a new approach for the duality in the piece. It required the complexity of clear and opaque light. This was the beginning of the lattice series of work, which subsequently developed into painted pieces. Whilst in the USA the artist embarked on a natural progression to this, albeit in a different sculpting material. The Cairns and Koans series comprises of one hundred pieces of ceramic sculpture as executed in just over one year. The pieces were hand-moulded and then beaten into shapes of different sizes and complexity. Although abstraction was part and parcel of the process semi-figurative work also emerged.

Born in South Croydon, Jeal studied Fine Art at Croydon College of Art and Sculpture at St Martins School of Art. He studied for his postgraduate degree in European Fine Art from Southampton University. For a period, he worked as an assistant for the British sculptor Sir Anthony Caro OM, CBE.

In addition to working as an artist, Douglas Jeal is a Fulbright Scholar and has contributed to the debate on public art in America and Europe; as well as having served as an active member of the Public Art Steering Group for Cambridge City Council.

Jeals works feature in both Public and Private collections in Europe and America. Over the years, Jeal has worked with many different materials including acrylic, balloons, plaster, wax, metal and clay. No other artist does anything comparable to his poetic work in semi-transparent acrylic.

As a sponge, he has absorbed many influences from having worked and travelled extensively abroad. Inspiration has been drawn from a wide variety of sources from Mayan art to literature, contemporary dance, calligraphy, Stravinsky and even Stephen Hawkins. 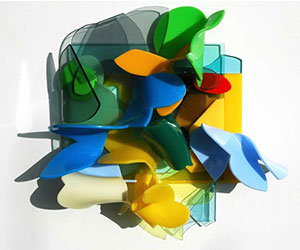 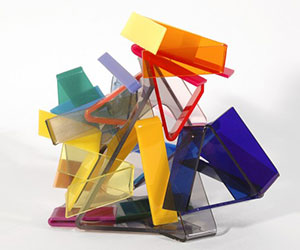