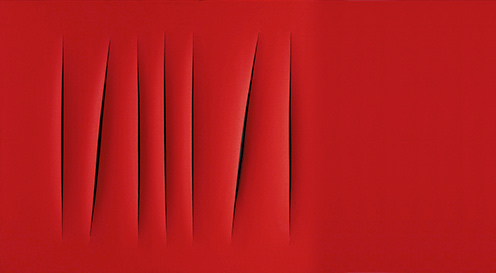 a one-man show in space

One of the art movements peculiar for always having influenced artists more so than art historians happens to be Spatialism. With some sweeping generalisations, the movement is a one-man show by the Argentinian-born Italian artist Lucio Fontana (1889-1968).

Mr Fontana founded Spatialism (or Spazialismo in Italian) in Milan in 1947. The year before in Buenos Ayres, Argentina, Fontana wrote Manifesto Blanco (the White Manifesto) in which he formalised his philosophy whilst applying a modicum of input from his students at the Altamira Academy. From 1947 -1952 he wrote 4 more versions of his manifesto, all of which critics have been quick to dismiss as telling one everything art is not; and very little as to what it ought to be.

matter, colour and sound in motion are the phenomena whose simultaneous development makes up the new art

His policy was pro that of uniting art and science into a performance. Next he wanted to abandon antiquated views and conventions of easel art depicting illusory or virtual spaces. He argued that the surface of a canvas was as real, weird and wonderful as anything you could add to it. With enthusiasm, he also wrote of the virtues of projecting colour and form into real spaces and using multi-media techniques such as neon lighting and television.

The journey towards Spatialism followed a meandering path

Fontana came from an Italian sculptor’s family who emigrated to Argentina. It was only natural that the young Lucio was encouraged to become a sculptor in his own right. As early as 1926, he participated in the first exhibition of Nexus with other young Argentine artists working in Rosario. From 1928 to 1930 he went to Italy and studied at the Milanese Accademia di Brera under the sculptor Adolfo Wildt. In 1939 he joined the expressionist art group Corrente in Milan.

His notion of Spatialism was novel if not revolutionary in one respect. He considered the choice of medium and form to be part and parcel of an artistic intention and the gesture of the artist as moving device. Hence, he wanted to synthesise colour, sound, space, movement and time in the creation of art. He saw the true essence of art as a gesture, and in turn that view has influenced several post-WW2 modernist art directions to lesser or greater extent. Those directions turned out to be as diverse as the abstract expressionism, Lyrical abstraction, Arte povera, Minimalism and Zero.

Over time, Fontana’s legacy has become over-simplified. While he worked very much across all media, people have gravitated towards his slashes and punctures. Of course, the inherent irony of mentioning that, is that this article uses graphics which rather clumsily aim at simulating his slashes. The real and brilliant canvases by the artist are monochrome canvases which have been cut with a razorblades thereby making them more 3d than 2d statements. Somewhat unimaginatively, Fontana titled a few of those works’spatial concept this, that or the other’. But more importantly, they clearly explored the same intellectual territory.

Again, the focus on that particular work might not do justice to the variety of art that Fontana actually produced. In 1949 he installed his Ambiente Spaziale at the Galleria del Naviglio in Milan. The piece consisted of an abstract object painted with phosphorescent paint and lit by a neon light, a pioneering example of what later became known as installation art. He would just as well bend neon tubes, puncture holes in some object or chisel dents into concrete (you might compare that act to the German ‘Zero’ artist Otto Peine who scorched and burned holes in his art). Fontana would apply unusual found objects, dirt and dust aligning some of his contributions with that of the Italian Arte Povera (Poor Art) movement. In 1951, he did something that could not be considered poor in monetary terms, because it was an elaborate neon ceiling called “Luce spaziale” mounted at Triennale in Milan.

While many art critics rave about Picasso or Braque, Rothko and other celebrated artists as the ones to be that defined the 20th century, contemporary artists would rate Fontana along with Duchamp as far more influential on art today. 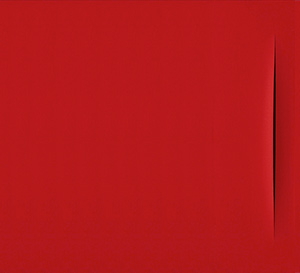 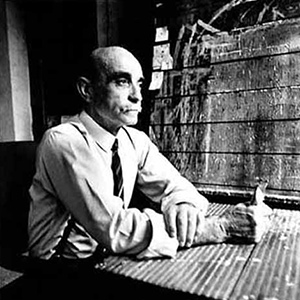 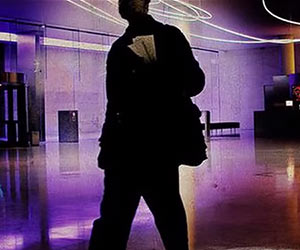 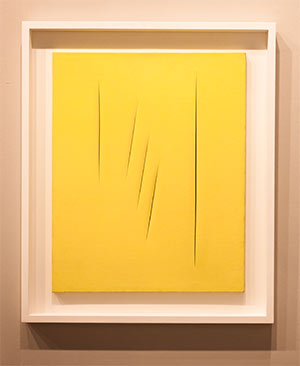