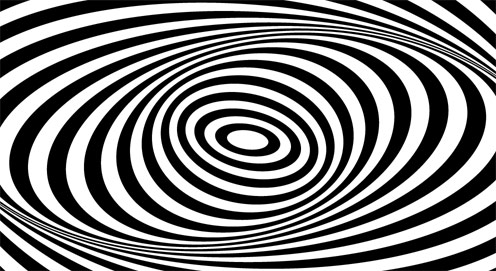 The name tag Op art fist appeared in Time Magazine on the 23rd of October 1964 referring to the art by Julian Stanczak. Within that particular magazine issue, Op art is explained as abstract art which plays jiggery-pokery with our visual perception. Although the term is phonetically close, it should neither be confused with Pop art nor Plop art, because its intellectual premise is very different.

Bridget Riley, one of the strongest proponents for this type of art is in no doubt about the significance of her explorations. When she titles one of her works ‘movement in squares’, it actually moves. Well, actually, the tempera on hardboard moves diddly squat, but your head tells you that you are being sucked into spatial depth with a clear vanishing point.

MC Escher would probably not have considered himself an Op artist, but more of guy with mathematical and repetitious sensibilities. In fact, the term “Op” continues to irritate many other artists labeled under it. In particular by those who happen to produce kinetic art as well. However, the trouble with Op(tical) art is that it is tautological. Just think about it for a second, and all visual art is optical illusionism in one way or another.

Besides that, this type of art dates a lot further back than many of us are prepared to accept. However what sets the popular perception of Op art apart, is that it often boils down to one optical illusion being explored at a time. In that sense, it is a reductive rather than an additive pursuit, and in turn it tends to impose a very limited colour palette to each work of art. E.g. the contrasting black and white.

The work commands respect. If you tried to create the art at home, it is surprisingly difficult until you crack the code through a series of experiments. The art can do a lot with you hands down. Not only can it give you the illusion of movement, it can also oscillate shamelessly, it can wave at you whilst wiggling its own backside, and it can make you one dizzy mizz Lizy. If that was not enough, it can flash, vibrate, gyrate, swell, warp and hide motifs within its own mind-boggling complexity.

As for an art movement that gained ground in the 1960s, it is a sobering fact that it has been sizzling away generations before someone came along and gave it a fancy name.

There are important antecedents to Op art. Opart’esce visual effects can be traced back to Neo-impressionism, Cubism, Futurism, Constructivism not to mention Dada. In addition, there is a clear connection to both Trompe-l’œil and Anamorphosis. But theoretically, the field of visual perception harks back to ancient Greece. The so-called emission theory was pioneered by Euclid and Ptolemy. Since then we have added Unconscious inference, psychology, transduction and gestalt theory to the blend.

Op art is quite simply a perceptual experience related to how vision functions. Thus, Op artists exploit various brain phenomena unabashed. The after-image effect is a big hitter, and we are all familiar with it. Just look at the sun for a fraction of a second, and you see a black spot when you look at something else. Line interference is another big one as is the reversible perspective and chromatic vibration.

If you would lie to (re)acquaint yourself with Op art, or related artists who resent the term, then seek out work by these artists: 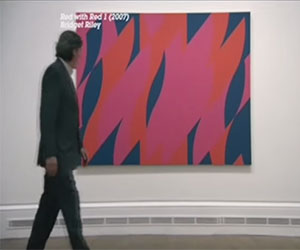 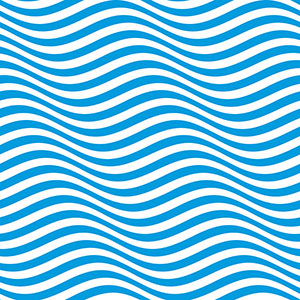 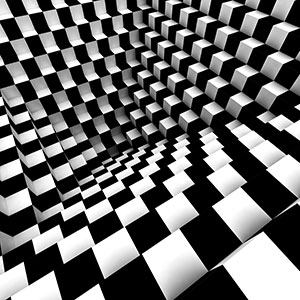